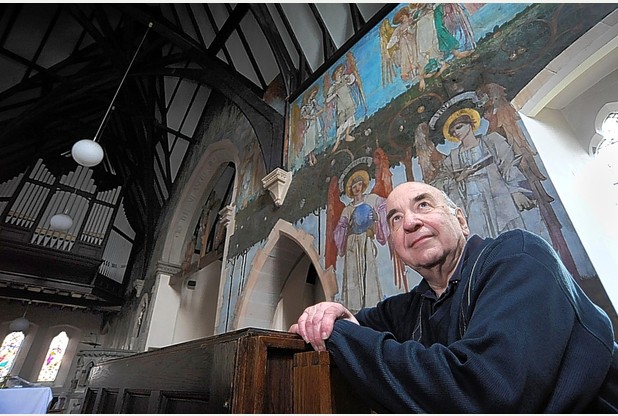 Deteriorated wall paintings that have adorned the walls of a Walsall church for more than 100 years have been given a much-need spruce up as part of a £200,000 restoration project.

Members of the church are now hopeful that the restored creations will help bring more public exposure to the historic building.

"They have been cleaned and conserved for the future and are now more pleasing to the eye."

Parishioners had looked at the possibility of conserving the wall paintings back in 1997 after the colouring of the century-old creations began to fade. Frampton had taken four months to finish his paintings, with the church the only one in the country to have the mammoth creations covering both walls.

Long-awaited restoration work began in January this year and was carried out by conservators Lisa Shekede and Stephen Rickerby.

Mr Barnard added: "They came across some great detail during their work and found out that Frampton had actually done a pencil draft on the wall, which he then changed before he had started these paintings.

"The people who did the work were surprised at the colours and how they came up. They have done a marvellous job.

"The feedback we have received from the public so far has been great."

Among the wall paintings are 21 angels and four archangels, which have been restored in full colour.

Residents were even invited to 'sponsor an angel', with sums of money being donated towards each image, which would then be restored by the conservators.

Around £68,000 was spent on restoring the fascinating artwork.

It is part of a wider £200,000 restoration project, which began in 1997 and has led to the installation of a new heating system.

Work has also been carried out on the church's external walls and stained glass windows.

The church received a substantial £13,000 grant from English Heritage and a number of smaller grants from other grant making bodies – but has made up the rest of the cash through fund-raising.

And work at the church is continuing.

"We are considering having some more lighting put near the paintings so that they are more visible," said Mr Barnard.

The church is now open to the public from 9.30am to 4pm each Friday for residents to view the restored paintings.