BLT by Colin Such 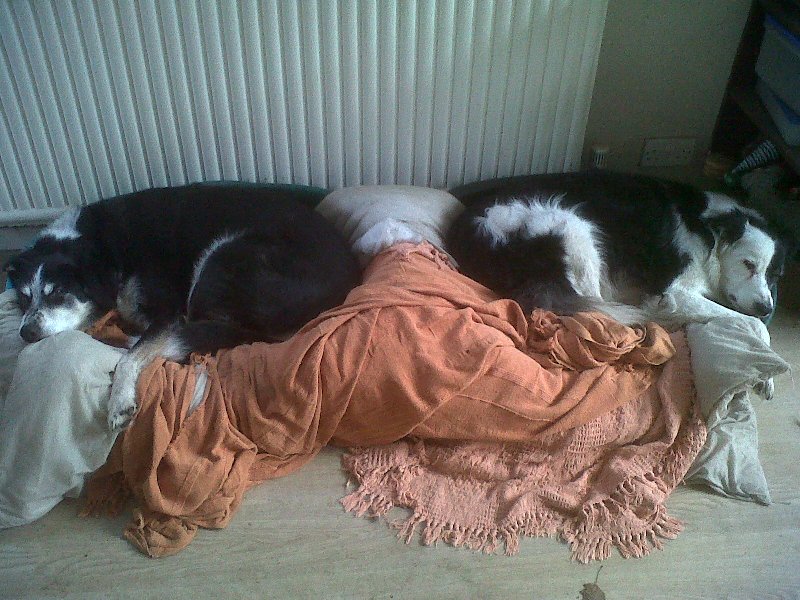 And so it finally came, the day when Bartleby died aged 15, leaving the vicarage dog less for the first time since I arrived as vicar. For the past 13 years many have followed his and Loki’s exploits in the church magazine and visitors to the vicarage have been welcomed by wagging tails, attempts to get treats and competition for seats on the sofa.
I made sure while I had them that I reminded myself just how lucky I was to have them and enjoyed their company to the full (though Loki could make that quite difficult sometimes depending upon what he had chosen to shred next!)
It seems strange to come back to the vicarage to find no tails wagging or excited attempts to make me go out into the garden to play ball. It’s also strange not to be walking round the Lime Pits mid morning but I am getting my exercise by working in the garden at the moment.
Most of you know that in November 2015 (a few months after Loki had died) the vet gave Bartleby just two months to live – in the end he lasted another 14 months.
It was only after he had gone that I realised how old he had been; our walks had grown slower and shorter and finally stopped and for much of the day he slept either on the sofa or under my desk. The days of two dogs barking at the post man and chasing squirrels had become a distant memory.
I’ve also realised how much the dogs have taught me over the years and how much they have given me; companionship, devotion, love, fun and the requirement of keeping things in perspective by leaving the latest worry behind and walking with them or playing in the garden.
I have said that I would have a break from having dogs so that I can go on holiday and do other things – dogs are quite expensive to keep and can restrict travel by needing to be catered for while away. However I also know just how much pleasure there is to be gained by sharing your life with a dog, the simple joy of companionship and caring for another creature who give so much back in return.
There will never be another two dogs like Bartleby and Loki and I have hundreds of memories of the everyday things of 15 years of sharing with them, but I think I will have another dog(s) sooner rather than later, to not do so would be to forget the gift they gave me. So be warned – you might soon be fighting for a seat on the sofa again!